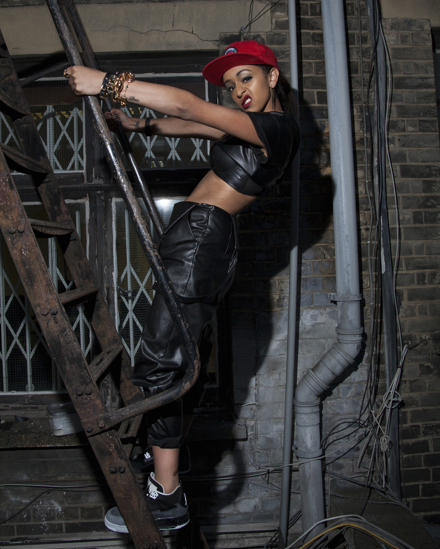 Hackney femcee and actress Paige Meade, also known as Paigey Cakey sits down with SB.TV to speak about her latest track Same Way, her legions of fans and the conception of UK Hip Hop’s newest and most exclusive club – #PrettyGang…

So you’ve come from a humble start in sunny east London to supporting Eve and Lil’ Kim live onstage at the end of this month in Greenwich – that must feel amazing right? What goes through your mind when you think about that?

It’s amazing. I listened to Eve and Lil’ Kim growing up and they are big inspirations to me. Seeing them and getting to support them is going to be a massive, massive thing because they are like idols to me. That will be one of the biggest shows that I’ve ever done.

If you get the chance to meet them, do you think you’ll carry a London reserve or will it be straight FANGIRL?

Yeah, so I’m not even going to fan I’m just gonna say I love your music, and take a picture – then maybe collaborate [laughs]

Why not? I read that Eve lives in London now.

Yeah, yeah, yeah someone was telling me that, I did my research and I found out that she’s marrying or married to a guy over here. That’s mad.

People lapped up your track Same Way and the video, you must’ve been pretty pleased with the response…

Oh yeah I love it. None of my videos have really made it to TV, only my featured videos with Tinchy Stryder and Dirty Danger and so this is my first music video on TV and it’s getting a massive response. It’s on Radio 1, 1xtra – they play it on Capital and Capital Xtra. It’s playing everywhere and getting a wicked response.

Do you think the haters got the message?

What can we expect from your next EP The Next Paige?

The Next Paige is going to have more of a direction, the first mixtape that I dropped The First Paigewas more of an experiment and I was finding myself. I was finding my path and what kind of sound I’m looking for. Now I’ve found my sound and I’ve found who I am as an artist. So this new EP will really be like a journey, it’s the next page of my journey and you’re really gonna get to know me. I sing as well and it’s going to have a lot of singing as well as rapping on it. The EP is gonna come out in January – I’ve pushed it back – I just think that it’s a new year so it should be a new page.

So you’re a member of the Alwayz Recording stable, how does it feel to be a part of that enterprise?

It’s crazy, I’ve always looked up to Alwayz Recording as a movement and the artists they have there like Chip and Wretch 32. Growing up, I was a big fan of Chip, I spat to him on the phone when I was like 15. It’s mad because now I’m in the crew, and they’re amazing and they really support me, since I’ve joined them they have taken me to a higher platform. Whether it’s putting me on TV, getting me on Radio 1 etc – I just love being with Alwayz, they’re so supportive.

I’m sure Chip and Wretch are heaving with advice…

What kinds of things do they say that leave an impression on you?

They just tell me ‘don’t let anyone get you down’, they say ‘the music industry is tough and people will say things – but you’ve just got to brush it off’. Which is why I recorded Same Way [laughs]

You’re also an actress and at the moment everyone is talking about your appearance in Attack the Block as it was on Film4 recently. What kinds of projects are you looking to take on in the future? Anything you’re currently working on?

Yeah, I just shot a cameo for Noel Clarke’s new project Legacy – he just called me up to appear because I worked with him before on another film called The Knot which came out in 2011. I got a part in another film called Money & Grime, that’s gonna be a big film in the UK and we start filming for that next year. I’m trying to continue to act, I don’t just want to do the music – I wanna be an all-rounder, a UK Queen Latifah.

[Laughs] I don’t even know even know how that came about! I just got gassed one day on Twitter and I just started hashtaging PrettyGang, but yeah I’m part of the #PrettyGang [laughs]. It was just two girls, and me – we just created our own little thing.

To what extent is being a #PrettyGang member something of a double edged-sword as a female emcee considering the impact your trying to make in a male-dominated Hip Hop scene? Do you feel taken seriously?

When I first came out doing music, a lot of males didn’t respect me and didn’t respect my music and would write silly comments like ‘get back in the kitchen.’ It is a male dominated scene and it’s only getting easier now because I’ve been out there and they know I’m serious. I’m not just a little female that’s gonna pop up and do one song, I’m a serious rapper and now I’m kinda earning my respect. Since I did my GRM Daily #Rated video, it brought me a lot more respect because a lot of people didn’t think that I had bars.

There were numerous stories posted online over the summer regarding a falling out between you and Birmingham femcee Lady Leshurr. Can you clarify what exactly happened there and where that relationship stands today?

It’s the media that made the situation seem worse than it was. We fell out over music and now we’re friends – we’re talking, there is no beef, and there is no ongoing argument. I don’t want people saying that there is beef, it was never that, we just fell out and now we’ve made back up – it’s cool now. The media just likes to stir things, we did make a lot of music together and we were really close. I’m not saying we won’t ever bring out anything else because she produced one of my latest songs – hopefully we’ll release more music soon.

I don’t wanna get you into trouble, but tell me something about Lady Leshurr that only a friend would know…

[Pauses, thinks] I dunno what to say. She loves Lil’ Wayne – but I think everyone knows that! That’s her favourite artist.

During my Paigey Cakey research, it didn’t take long for me to realise that you have a long line of admirers – do any of them take your fancy?

There’s a lot of love for you out there, I came across a YouTube tribute video dedicated to you featuring a montage of pictures – that’s how deep the love goes.

I think I saw one of them, and there are pictures of me – I think a fan made it. [Laughs] obviously I didn’t make it! [Laughs]

On top of that, you have a pretty huge lesbian fan base…

You know why I think that is a sick thing? For a male performing he’s got all the girls going like [screams], for a female performer it’s hard because girls wanna act stush and just stand there and guys are not gonna shout and throw their hands up. When I perform I get the girls going crazy and the guys so I think it’s sick.

Have you had any weird, crazy encounters with any members of your adoring fan base?

I’ve got one fan, one of my biggest fans and she has got an album on her phone called My Wifey: Paigey Cakey and it has over 300 photos of me. I go onto my computer and I don’t even have that many photos of myself! If you ever need pictures of me, I’ll put you in contact with her. She’s got so many! [Laughs]

I interviewed Grime emcee Kozzie the other week, and during my research I found out that he certainly classifies as an admirer of yours…

I know. He did a tune and said that he wants me to have his baby, he did a spin on the Drake line, [raps] ‘I’m tryna give Paigy Cakey a baby and no one can stop me.’ That’s what he said…

I think the two of you would match up pretty nicely. Am I crazy?

Would you ever date an emcee? Have you?

Never. I always said that I would never date anyone within he industry. It’s like Beyoncé and Jay Z– I don’t know how they do it. I just think dating anyone in the industry whether it’s football, acting or music will be hard. Because you’re both gonna have busy lifestyles and be in the public eye. People are always gonna be there and picking out little things about you. If I ever date anyone it will be someone lowkey, just a normal person that works nine to five.

I’ll quote you on that.

[Laughs] I can just imagine going out with someone and then there’s a background story on them in the newspaper. I wouldn’t know what to believe, I’d be like ‘Oh my God!’

Speaking of background stories, you’ve been tweeting with Tamera Foster from this year’s X Factor who’s endured the experience of having an ex come forward to reveal the details of their relationship. Are you guys friends?

I don’t really know Tamera that well, but she supports my music and I’m watching her on X Factor, she’s my favourite and I’d love her to win. I don’t know her but I’m gonna support her because she supports me, so that’s really nice. #PrettyGang stick together! [Laughs]

You’ve already got a lot going on, movie roles and EP’s – what more would like to do moving into 2014?

For next year I like to finally put out some proper merchandise, I had the beanies but I’d love to put out proper clothes and support a few more artists like Nicki Minaj and Drake, that would be a dream and so I’m going to keep trying. I’m going to start working on an album, and I would really like to do my own tour. I think that I could do a mini tour around a few places like London, Birmingham and Manchester – the bigger cities – I would love to do that, hopefully next year.